Colmar scavenger hunt and city tour was created to offer you the best way to explore a beautiful city of France.

a labyrinth of cobblestone lanes and delicious food: come to Colmar,

one of the quaintest cities in Alsace, and enjoy its art of living!

Full description of Colmar scavenger hunt and self guided tour

What you need to know about Colmar scavenger hunt ?

This is one of the most exceptional museums of Colmar. It boasts an extensive assortment of artworks from the 13th century. The building itself is pretty noteworthy. It contains a well-preserved double-arcaded cloister. The museum has also expanded its galleries in 2015 with adjoining buildings occupying former municipal baths of the city.

You can now find a diverse artwork range here. However, Isenheim Chapel is the major highlight of the museum.

Overall, it’s a must-visit place for anyone in Colmar.

Theatre Municipal de Colmar is a popular theater situated in Colmar in the Haut Rhin’s French. department. It has circular rooms designed in the Italian theater’s design. It also includes three galleries. The theater located in the Rue Kleber just next to the Unterlinden Museum.

Originally, the theater’s building was constructed in 1849 in replacement of the Unterlinden convent’s old part. The exterior of the building displays French style with 5 bays while the interior boasts Boulangé. It attracts about 30,000 attendants yearly.

Unlike other European cities, Colmar France doesn’t boast the main square for people to hang out. However, people enjoy hanging out in one of the most amazing parks of Colmar that’s Parc du Champ de Mars.

This is one of the most popular places to relax and enjoy with friends in the city. So, you can simply find a lot of people enjoying themselves there. In the shops around here, you can also find some of the tastiest food in Colmar.

This is another amazing Auguste Bartholdi statue that was sculpted in 1888. This is a bronze statue above the fountain that represents Jean Roesselmann, the public judge. He has a prominent position in Colmar’s history. It is because Auguste Bartholdi passed away while defending the Colmar against Strasbourg’s Bishop. He is also one of the first heroes of the Colmar.

The Germans took away the statue in 1943. However, it was reinstalled here after restoration in 1945. It is now placed on a white stone monument containing four fishes around for decoration. Overall, it’s beautiful to see.

No matter what’s your visit duration to Colmar France, Little Venice here is a must-visit place for everyone. It’s a stretch of beautiful half-timbered buildings with a canal. Overall, this is one of the most picturesque places to visit in Colmar. Walking along the canal, you will feel like you have stepped into a fairytale. It is because the place is truly magnificent with rustic homes in sherbet color.

Well, the old Fishmonger District is the place where fishermen used to live centuries ago. The fishermen used to be a powerful entity in Colmar’s history. However, at present this historic area of the city has become another vestige of the ancient professions of the town. 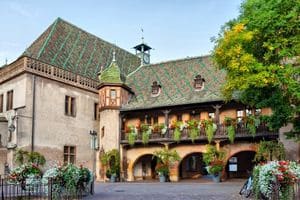 This destination has a very strategic position just near the Place du Marché-aux-Fruits. This is a 15th-century building aka Ancienne Douane. It was once a political and economic center of Colmar. However, at present, the area is neighbored by the merchant houses that are half-timber with a fountain in the center.

Currently, the plaza often hosts wine tastings, fairs, and festivals. So visiting it can be a treat itself for you.

This church has served as a Protestant house of worship of Colmar. Just like Dominican Church, its building boasts an austere style that’s common for mendicant orders of Alsace. Franciscans constructed it in early 1292. However, the construction completed after a century.

Most recently, the building has been used for Protestant worship. Additionally, it also boasts a venue for concerts due to its beautiful acoustics.

He is popular as a creator of the Statue of Liberty. Along with that, he has also made large-scaled other sculptures throughout his career.

However, the three-story Musée Bartholdi includes sketches and models of his major artworks. So, it’s a must-visit place for anyone who has an interest in the artist and his magnificent work.

Only logged in customers who have purchased this product may leave a review.