Barcelona scavenger hunt was created to offer you the best way to explore this amazing city !

Barcelona has become one of the first tourist destination of Spain, it has everything to please the majority of visitors : with a history among the oldest in Europe, Barcelona, which never sleeps and an inland full of charm not to forget beautiful beaches in La Costa Brava.

The variety of artistic treasures, the Romanesque churches and the great names in modern art and architecture , Dali, Gaudi, Miro, Picasso …

Barcelona scavenger hunt is the ideal way to explore the city.

It is an outdoor activity combining playing, walking and learning.

The Plaça de Catalunya (Catalonia Square) is the heart of Barcelona City and the most active place of the city at every hour of the day.
It works as a main connection between the Old Town, la Ciutat Vella (the Gothic Quarter) and the New modern city (the Eixample District).

This central square is crossed by the most important and busiest streets of the city: Passeig de Gràcia, Rambla de Catalunya, the mythical avenue of La Rambla and the famous shopping street Portal de l’Angel.

The buildings located all around the square are mostly offices and banks.  There is also a huge shopping mall named El Corte Inglés, the most important one in the city as well as the Official Apple Store. Due to its location, is almost impossible not to visit it during your stay in Barcelona. It is usually the main meeting point for locals and visitors. 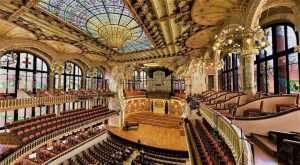 Barcelona’s Palau de la Música Catalana is one of the most striking concert halls in the world.
Built between 1905 and 1908 for the Orfeó Català (a Catalan choral society).

It is currently one of the most representative Catalan Modernist buildings in Barcelona City.

The building has played an essential role in the society of Barcelona. This auditorium is naturally lit during the day giving with a bright and colorful light thanks to it stained-glass panes and its enormous stained glass skylight. The hall is beautifully decorated to immerse the spectators into a magical world.

The hall and the stage contain sculptures, busts, reliefs that fill the room with magic and create an ideal atmosphere for the various artists and music forms that are performed in the Palau. 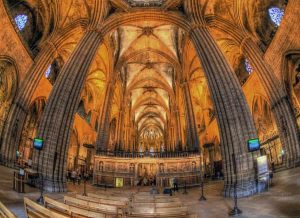 The Cathedral of Santa Creu and Santa Eulàlia of Barcelona City  was built between the years 1317-1441 on the old Romanesque cathedral. We have to go further in time as it happens with many churches and cathedrals to find out about its history.

The Romanesque cathedral was built on a church of the Visigothic period and this one on an Early Christian basilica whose remains are in the basement of the Cathedral of Barcelona.
The neo-gothic facade was added in the 19th century. From Carrer del Bisbe there is an entrance directly into the cloister, a gothic dream world of fountains,  and geese (13 in total).

As the legend says  Santa Eulalia was thirteen years old when she was executed and shepherded geese) and palm trees.  Another secret world is the roof of the cathedral which can be reached by an elevator adjacent to the left nave. 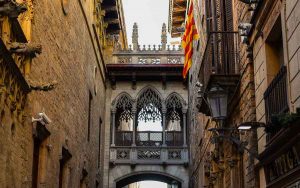 Barrio Gótico, Spanish for ‘Gothic Quarter,’ is one of the oldest and most beautiful districts in Barcelona. It is a labyrinth of small streets full of little bars, restaurants and shops. The neighborhood is part of the Cituat Vella, Catalan for ‘the old city,’ and is situated right in the city center: it stretches from the famous Rambla to Via Laietana. Get lost in narrow streets of Gothic quarter while playing our Barcelona escape game! 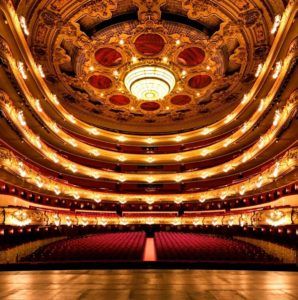 The Gran Teatre del Liceu, known locally as El Liceu, is considered to be one of the world’s most important opera houses.
Located on La Rambla, it was built in 1847 to house the city’s Music Conservatory and to provide a space where the city’s middle class could enjoy the opera. Some of the opera world’s most renowned singers have graced its stage.
Its history, however, has been associated with a curse, as over the years it has suffered two fires (one in 1861 and another in 1994) and a bomb attack in 1893. The current building is a faithful restoration of the original, constructed after the 1994 fire.

La Rambla is the most famous street in Barcelona City and one of the most vital places of the catalan capital.
Without a doubt, is one of the most essential attractions to visit in Barcelona.La Rambla starts at the epicenter of Barcelona, Plaça Catalunya (Catalonia Square).
It stretches along many important spots you’ll also want to get acquainted with, ending by the seaside shopping center Maremagnum.
This 1,3 Km long promenade marks the division between Barrio Gótico (Gothic Quarter) and El Raval. Barcelona’s cathedral is just located a few blocks away, as well as Plaça Sant Jaume, which houses the main Catalonian Government Building and the City Hall. 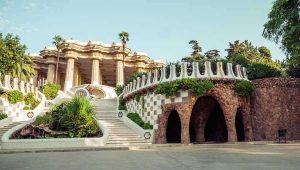 The Guell Palace, ” Palau Güell” in catalan, was constructed in 1888 by Antoni Gaudi.
In the lobby of the Palace, the light that falls through the windows is subdued by three huge parabolic arches formed by grey, smoothly polished stone pillars.

The towering arches create the impression of a Gothic window; but the windows which Gaudi employed in Guell’s palace are rectangular – in other words, serve as a counterpoint to the lines of the arches.  These arches also reveal the first signs of his worries with Art Nouveau.
The Art Nouveau elements of the entrance gate were also repeated inside the building. For one thing, there are lavish decorations on the pillars, of which there are a considerable number : from the thick, supporting, mushroom-shaped polished grey pillars made of snake-eye stone excavated from a quarry in the Pyrenees. 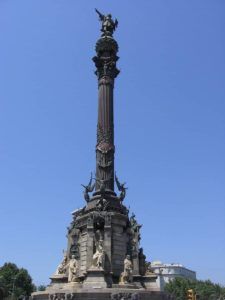 This 60m tall monument topped by a bronze statue is placed at the site where Columbus landed upon returning from his first trip to the Americas.
The Monument was designed by the Catalan architect Gaietà Buigas i Monravà and the statue was sculpted by Rafael Atché, it stands atop a sculpture of the crown of Catalonia.
The interior of the the crown is a small viewing area accessed by an equally small elevator inside the column, providing stunning views of the city and Port Vell. The statue is not pointing towards the new world but possibly in the direction of Columbus home city of Genoa. 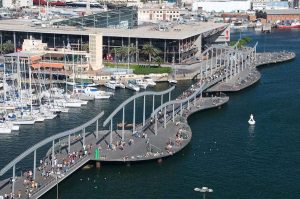 The Rambla de Mar is a walkway over the water, the natural continuation of the Ramblas in Barcelona City. Designed in 1994 its modern architecture and minimalist form are the most emblematic image of Port Vell. It is an undulating wooden walkway, with two openings, supported over the water by two iron arms. Every hour on the dot it opens to allow recreational boats to pass through. 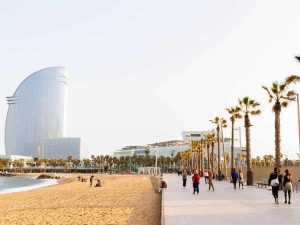 The Barceloneta is a triangular spit of land. It cuts into the sea boats in the old harbour, or Barcelona’s Port Vell, on one side, and sandy beaches on the other.

The neighbourhood, with its narrow, rectilinear streets, was built on a military grid structure to provide accommodation for the former inhabitants of La Ribera who had lost their homes due to the construction of the citadel. The houses were low-rise and small in scale so as not to obstruct views of the city. 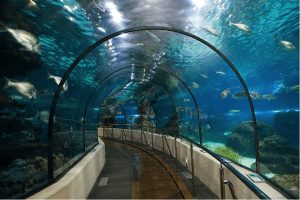 L’Aquàrium of Barcelona in Port Vell is one of Europe’s biggest marine leisure and education centres and the most important concerning Mediterranean species.
Its mission is to provide visitors with a greater understanding of undersea life with 11,000 marine animals from 450 different species which live in five million litres of water. 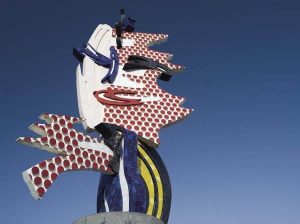 This is a sculpture by the North American Roy Lichtenstein.
The red dots are representative of pop art. He used the world of comics as a reference, reproducing their printing systems in his paintings.
The trencadís used refers to the modernism period in Barcelona.Cara de Barcelona (The head) is a large sculpture by the North American artist Roy Lichtenstein.
It was created with the help of Diego Delgado Rajado, a sculptor from Extremadura.
The sculpture is in Colom avenue, next to Moll de la Fusta (the wooden pier). It dominates the entrance to the fishermen’s’ neighbourhood called Barceloneta. The red spots on the Cara de Barcelona sculpture are characteristic of Lichtenstein’s work. 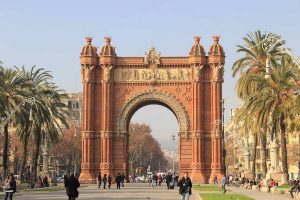 The Arc de Triomf in Barcelona city, is a triumphal arch in Barcelona that was built as the main access gate for the 1888 Barcelona World Fair by architect Josep Vilaseca i Casanovas. The arch is built in reddish brickwork following the Neo-Mudéjar style, the friezes at the front and at the back has sculptures, one of them  from Josep Llimona, an important artist in Catalonia.