Ghent scavenger hunt was created to offer you the best way to explore a unique city. Ghent’s history dates back to the 1300s, when it was the richest and largest city in northern Europe. The confluence of two rivers, the Scheldt and the Leie, made Ghent a major port city, and in the 18th and 19th centuries, the city had a thriving textile industry.

Museum admission fees: Visits to museums and other attractions do not require a ticket. The puzzles are related to
their outdoor areas. Admission is purely your choice.

This is one of the most well-known churches present in Ghent, and it is known for its gothic theme. Being a roman catholic, it was built in the 15th century, and the interior decoration of this crouch takes you right to those days. Apart from all the viewing, you can visit some restaurants that are just within walking distance, providing you the right food to explore Ghent. 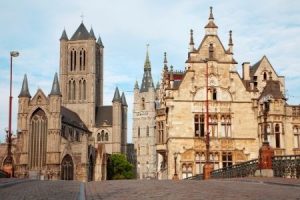 If you look for reasons to love Ghent, one of the biggest ones is this bridge. The thing that makes it so special is that this lace in Ghent is surrounded all over by amazing views. Apart from all the views and the romantic atmosphere of this bridge, one thing you will never want to miss is to pause for the view of the three towers. Visiting this place in the evening time when the gothic buildings nearby are illuminated will guide a jaw-dropping view. 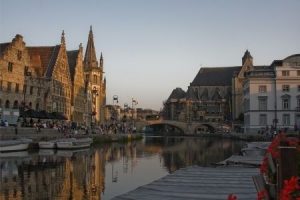 Located in the center of the city is this concert hall. Whether you are au for any type of music, you will get it here, and the amazing thing here is that you can enjoy standing as well as seated concerts here. 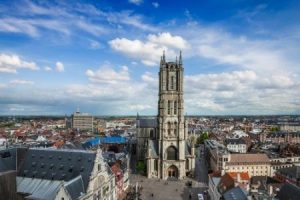 Dating back to the 10th century, this church has been standing here since then. The interesting thing is that it has been converted many times until it finally became Saint Bavo’s cathedral in the 16th century. Not only is this church located in the heart of the city, but I also have the treasure of art from Ghent with a lot of masterpieces. 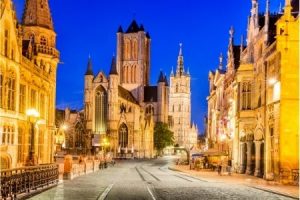 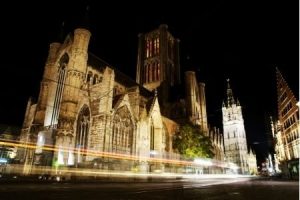 This church takes you to the 13th century, and it is also one of the oldest landmarks here in Ghent.  Not only this but being right to the main square means that you can stop by for an amazing feast from any of the top-class restaurants here.

Here you will be at the most famous tourist attractions that are situated right between the Leie Rover and the Saint Nicholas’ Church. Not only does the beauty of this place will attract you, but the restaurants with terraces and the Ghent coffee will become an amazing experience. 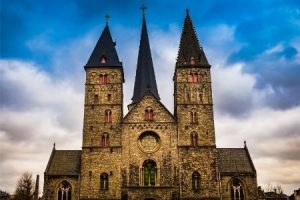 The churches date back to the 12th and 14th centuries, and this is also built in the same gothic theme. However, now it has gone through numerous expansions making it even more attractive for the visitors. 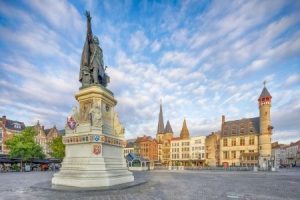 Located in the historic center of the city, this is a city square named after a regular Friday market staged here every week. Though it is rich in history, this could be the place to explore a lot about Ghent via the market here. 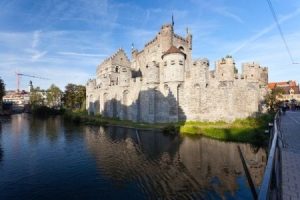 The Medieval castle that dates back to the 12th century is an amazing sight and has a lot of things to explore. A place that served as a court, prison, cotton factory and a lot more is now one of the tourist attractions with its amazing sight.